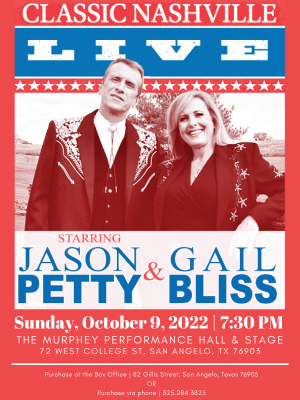 Jason Petty and international singing star Gail Bliss take you back in time on a musical journey through the magnificent history of country music…its stars, its songs and the stories that made them great. A live, authentic Nashville band and period set and costumes help bring the legendary songs back to life in this fast-paced, humorous and poignant tale of the music that became the soundtrack to several generations. George Jones, Hank Williams, Patsy Cline, Loretta Lynn, Johnny Cash, Tammy Wynette and many more are featured in this wonderfully acclaimed 2 hour production. In the wake of Ken Burns’ feature on the history of country music, this show seamlessly walks you through the 40’s, 50’s, 60’s 70’s and 80’s country music legends. In Jason and Gail, you get 2 worldly-acclaimed singers and storytellers who met and became friends with many of the legends presented in this show. Their firsthand knowledge of the stories makes this a night to remember for your audiences, and it’s all in…Classic Nashville Live. ​

Stand By Your Man – Tammy Wynette