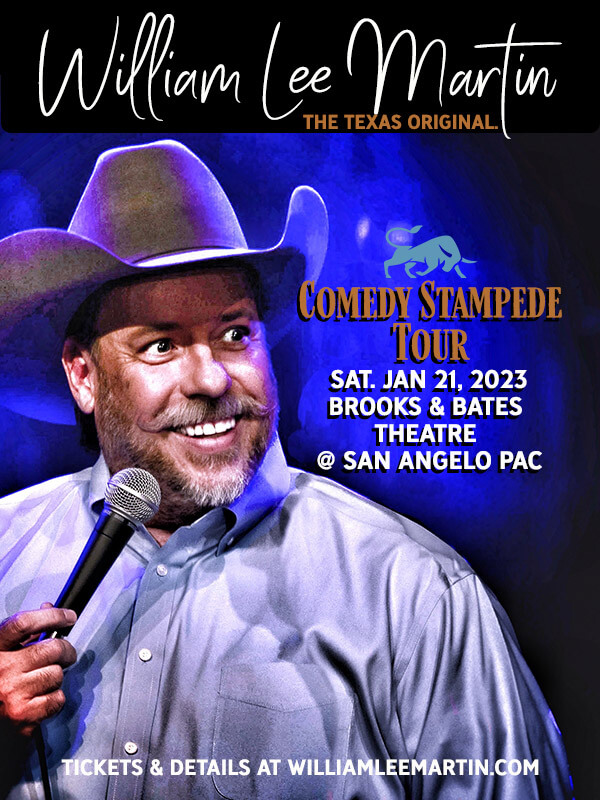 William Lee Martin brings his Comedy Stampede Tour to the Brooks & Bates Theatre at the San Angelo PAC in San Angelo, TX, January 21, 2023. Martin is a story-telling stand-up comedian who wants to make you laugh after a long day. He’s a regular at the Grand Ole Opry and the MGM in Las Vegas and has been touring since 1996. The Texas Original. sells out clubs and theaters around the country. He has three, one-hour comedy specials including “Let the Laughter Roll” which aired on CMT, plus “Standing in the Middle” and “The Nutcracker: a Christmas Special based on his Vasectomy” which are currently streaming on Amazon Prime, Apple TV and the Comedy Dynamics Network. During the 2020 pandemic, his following on social media exploded with his positive and upbeat “4 o’clock Daily Talk” on Facebook and other platforms. He works relatively clean but disarmingly clever. (Although it may not be suitable for younger audiences). He resonates with people because he looks, talks, and acts like a huge demographic of this country without having an agenda, being negative, or complaining about things. Family and friends still affectionately call him by his nickname, “Cowboy Bill”. He’s a must see, 26-year overnight success story.